The tennis championships at the All England Lawn Tennis and Croquet Club, more commonly known as ‘Wimbledon’, brings excitement to our little corner of south west London every summer. And for those two weeks it’s hard to venture out of our borough. But now that the tennis is over it’s worth noting that south west London has more to offer than just two weeks of tennis.

Sitting on the River Thames at Richmond, the Bingham Riverhouse gives you beautiful views whether you’re seated inside or out. Having recently undergone a makeover with a £1m refurbishment and a new Head Chef – one who has a Michelin Bib Gourmond and 3 AA

Rosettes – the Bingham Riverhouse is definitely worth visiting this summer. While it has the feel of a members club as you enter – there’s no garish neon signage at this restaurant, only a discreet name plate by the door – we were told by the team that their aim is for the restaurant to be far more accessible than it was in it’s former life, so please don’t put off booking because you think it’s too posh; everyone is welcome at the Bingham Riverhouse!

I can’t lie, as I stood on the balcony enjoying my aperitif cocktail, I did feel like I could’ve been in a period film, one that’s set in the twilight of the big houses’ heyday. There is a calmness to the river, despite it being kept busy with rowers training, birds flying overhead looking for supper, aeroplanes flying to nearby Heathrow; noise seemed to disappear and it was just me and my drink. And the many other guests enjoying the Bingham Riverhouse that evening too! 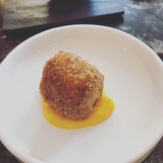 I was treated to a tasting menu which included torched mackerel, raw beef with a spiced tomato relish and raw

egg yolk (I would call this steak tartare), and delectable duck (the most beautiful slices of rose-pink duck breast). The absolute stand-out dishes for me were the pig head croquette (I’m still dreaming of that succulent meat) and the salmon with oyster mayo and crispy oyster on the side. Simply

heavenly. We finished off our feast with a pudding of bitter chocolate with wild strawberry sorbet, which I certainly went wild for!

You can enjoy dining at the Bingham Riverhouse from just £37 (for two courses, £45 for three courses) and I would say with such fine quality food and beautiful surroundings it’s really not to be missed. Dining here may become another British summertime tradition for me!

I love a burger, possibly a bit more than the next person, and so when I receive an email telling me that a new burger restaurant is opening in Borough, I tend to get rather excited!

Located a short distance from London’s famous foodie-favourite Borough Market, Yen Burger, a Japanese-inspired restaurant, opened its doors in November and it wasn’t long afterwards that lovely Livvie and I headed there to find out exactly how good the burgers were.

We sat by the bar, which is beautifully decorated with pretty cherry blossom overhead and has a refreshingly unpredictable range of cocktails. We started with a cocktail each; I chose Wild Flowers (hibiki, blackberry, lime, and cranberry) and Livvie chose a Fuzzy Guava (vodka, prosecco, peach schnapps, orange, and lemon). Having also tried the Long Night (gin, whisky, rum, Cointreau, vodka, and ginger ale) – which tastes just like childhood sweets refreshers – I feel confident in saying that whichever cocktail you choose you won’t be disappointed. While they’re standard London prices it did feel like we were getting a bit more alcohol per cocktail than some places offer too, so we were happy.

Onto the food; our friendly waitress didn’t show any judgement when we ordered two burgers and FOUR sides – the sides were all just too tempting! Livvie chose the Finest Chick (coconut panko chicken breast, slaw, shiso, tomato, red onion, and mango sauce) and I decided to go for the Yen Burger (100% wagyu beef batty, lettuce, shiso, pickles, red onion, smoked turkey bacon, yen sauce, and cheese), named after the food entrepreneur behind the restaurant. At £10 and £12 respectively the burgers weren’t cheap, but for that part of London it’s not unexpected to pay that much for a burger, and the burgers themselves didn’t disappoint. The flavours of the Finest Chick were delightfully put together and just melted in your mouth. The Yen Burger was huge but I didn’t waste a bite, it was that delicious! The beef was also melt-in-your-mouth delicious and, although slightly over-cooked for my personal taste (I’d have a burger super-rare if I could!) other than the colour it didn’t appear over cooked. So maybe I could be converted to the church of the well-done burger if the beef is good enough…

There’s an interesting range of sides – a cross between a Japanese noodle house and a burger bar, which while ordinarily would be an unusual combination it’s what you’d expect at Yen Burger. We chose the Gyoza – which were light and crisp and the best gyoza I’ve had in a long time! – and Halloumi and Mango along with more standard burger fare of Dashi Chips and Sweet Potato Chips. While I’m a big fan of anything sweet potato, I think

when I go back, I’d stick to the gyoza or maybe try the Pomegranate Salad for something lighter. It wasn’t easy, but we did manage to finish it all! Ordinarily I’d say you really don’t need four sides between two of you (we wanted to try a range though, for the benefit of our readers!) but if you are hungry the sides don’t break the bank ranging from £3 to £4.90.

I would recommend Yen Burger, although I do think it leans more towards the burger than Japanese cuisine, so as long as you know this in advance you shouldn’t be disappointed! 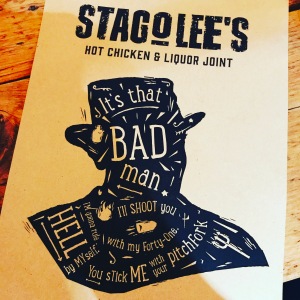 For a south-west London girl who loves country music and food (in no particular order), I was really excited to hear of a new southern American restaurant, Stagolee’s Hot Chicken and Liquor Joint, opening up in Fulham. While I’ve made the journey across the pond a few times I’ve never been to The South so this cuisine was virgin territory for me, and my taste buds were beyond excited. No pressure then Stagolee’s…

The South is famed for its hospitality and Stagolee’s didn’t let us down. We were greeted by friendly (but not too intrusive) staff and enjoyed a chat with the Nashville-native owner, Jordan, who talked us through the menu, whisky, moonshine and what makes southern cuisine so special.

We started off sharing the hot spinach dip, a cheesy spinach and artichoke dip served with tortillas. I could have eaten this and nothing else all evening and left a happy woman. Spinach, artichoke and cheese are three of my favourite foods, so put them all together and I was in food heaven for a while. But it was my duty to eat a main course too…

We opted for the chicken platters; excellent value for money at under £10 each. Beware those of you who aren’t keen on heat, you might be best off choosing the skillet fried chicken. We went for the hot chicken which I loved – but I was pleased to have sides to balance out the heat. Olivia found the hot chicken a bit too hot, and she’s fairly hard-core, so tread carefully, but if you think you’re tough enough I personally recommend the hot chicken.

When I say excellent value for money I really mean it. We each got two pieces of delicious chicken, two yummy sides and cornbread. And speaking of cornbread, where has it been all my life? I wasn’t expecting to enjoy what seemed like cake with a main course quite as much as I did. I really must have a go at making some myself! Sides include the classic mac and cheese, sweet potato, southern-style greens (served with ham hock – again, mouth-wateringly scrumptious), and carrot salad (which reminded me of coronation chicken without the chicken. Or the mayonnaise). The carrot salad was refreshing and full of flavour – definitely my favourite. Crinkle cut chips are also available but it seems a shame to me to not enjoy the other side dishes. Let’s face it, you can get chips almost anywhere. 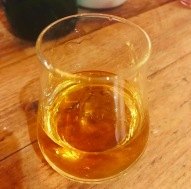 I’m afraid pudding beat us – there was simply no room left. However, it would have been almost criminal to leave without enjoying a whisky. Having started the evening with a delicious gin cocktail and then enjoyed a bottle of red with the main meal I wasn’t really in the best place to judge how good a whisky it was, so I’ll just have to trust the barman on this one. Needless to say, I enjoyed it!

So the big question is, would I go back to Stagolee’s? Absolutely, although really do feel the need to visit Nashville even more than ever now to check out the food, if nothing else!